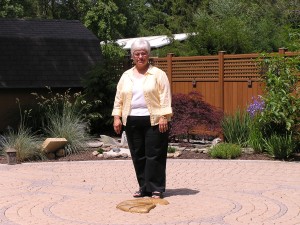 The Norma Stark Memory Garden and Labyrinth was created in the memory of Norma’s parents, Norman and Anna Belle Swaisgood, who passed away October 13, 2005 and April 23, 2006, respectively.

The Garden and Labyrinth is designed to be a sanctuary for peace, prayer, meditation, and healing. The focal point is the labyrinth, designed by John Ridder of Pax works, Indianapolis, Indiana. It is a 9-circuit adaptation of the Chartres Labyrinth that is found in the cathedral at Chartres, France which dates back to the year 1202 A.D.

The labyrinth was sculpted by nationally known brick artist, Marty Kermeen, of Labyrinths in Stone, a division of Artistic Pavers, Inc, Yorkville, Illinois. The labyrinth is 32 feet in diameter, plus the concrete retaining ring, which adds 1 foot and 6 inches. The path is made of golden buff solid brown twinkies, each 2.33 inches wide. Marty arrived on site April 22, 2007, and completed his work thirteen days later on May 5th.

Prior to Mr. Kermeen’s arrival, Marc Adams, Maumee, Ohio, began work on March 19, 2007. Marc and his crew constructed the base which is 15 inches deep and contains 48 tons of gravel. The concrete containment ring is 18 inches deep. Marc also designed the installed the grading and drainage system, paths, walkways, and fountains throughout The Garden.

The design at the entrance of the labyrinth is a “triquetra”, a Latin word for “3-cornered” and a symbol for holiness, purity, and innocence. It is one of many symbols of the three elements symbolizing the Holy Trinity. 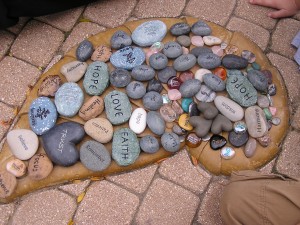 At the center of the labyrinth is a sculpture of a 13-chambered nautilus, carved by Marty Kermeen. This design is also referred to as “the golden spiral” and represents the sacred geometry found in all nature. The geometry of the spiral manifests in nature as a form of proportional growth. The nautilus has successively developed chambers, each larger than, but as perfectly proportioned to the previous one. This is a feat of biological engineering that uses the logarithmic spiral, a geometric shape that retains a constant angle with respect to its original center. Marty created this sculpture from an Illinois limestone rock called golden harvest.

Fred Hower, known as “The Ohio Nurseryman,” designed the landscape plan and served as consultant. Mr. Hower is from Worthington, Ohio. Plantings, irrigation, and lighting were completed by Corso’s Landscape Center, Sandusky, Ohio.